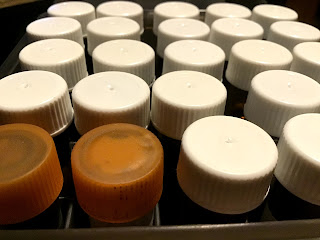 When you add in the high cost of shipping and tax, unless you are pretty well off, you will be seriously constrained as to the range of inks that you can buy.  That is why I am thankful for ink samples offered by Goulet Pens, Anderson Pens, Pen Chalet, and other vendors.  That at least gives the most frugal of us a chance to experiment with small quantities of even the most expensive fountain pen inks.

I hope that manufacturers will provide more low cost ink options.  I am sure that this can be done as that the bottle is probably more expensive to manufacture than the ink inside.

What do you think?  Do you think that fountain pen ink is too expensive?  What is your favorite "go to" ink?

Are Hand-Finished Fountain Pens Worth It? 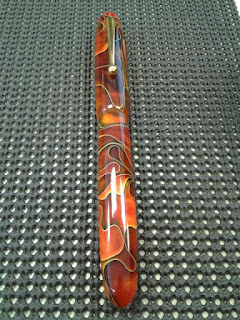 I bought my Edison Collier back in 2013 and it is one pen purchase that I have never regretted.  Although it is not a completely custom pen, it was turned on a lathe and hand finished.  It is really a work of art.

I prefer hand-finished pens to those created in factories using mass production methods because of the tender loving care that goes into them.  The human touch.

It really makes a difference.  And, yes, hand-finished pens are worth it.

I love pens from Edison and other companies that produce hand-finished pens like Franklin-Christoph and Ranga.  They are unique and very versatile.  I can swap nibs, use them with a converter, with cartridges, or as an eyedropper.

One day, I hope I can afford a custom pen from Edison so that I can pick the design and materials that are tailored to my aesthetic sensibilities and my writing needs.

Until then, I can only imagine the pen of my dreams. I know that I haven't shown up here in quite a while. I have been retired for the last few years and haven't spent a lot of time with my fountain pens lately, although I hope that will change. I've been doing most of my work on my tablet and my computer.  Dictation is sure a lot easier than writing everything out by hand. And, paper takes up a lot of space and is pretty expensive these days.

I still love my fountain pens although I am not able to buy them at the pace that I once did. That said, I still have a pretty nice collection that I acquired over the years and plenty of pens to put into rotation as long as I can afford the ink and the paper.

I also tend to use pencils quite a bit for drafting because my pens tend to dry out while I am in the thought process.  I have also experimented with using the Apple pencil and styluses with my iPad. There are some good drawing apps that are very good for note taking such as Notability and Good Notes and provide a pleasant writing experience.

My books, "The Fountain Pen Book" and "Getting Started with Fountain Pens" are still selling on Amazon, Apple Books, B&N, Kobo, Sribid, Smashwords, and other stores. I thank the fountain pen community for continuing to support my efforts. Hopefully, one day I will be able to write some more books and revise the ones that are already out.

With the global pandemic going on, perhaps I will be able to spend more time using my fountain pens for enjoyment rather than utility. I do enjoy using them to continue to improve my penmanship.

Are you a Fountain Pen Addict? 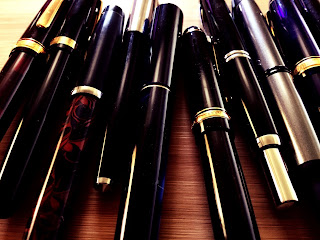 Is fountain pen addiction a thing? Given the large size of some of our pen collections, I often wonder.

I am sure many of us have looked longingly at Brian Goulet's amazing pen collection that is housed in a growing number of IKEA cabinets with drawers. Of course, Brian can justify owning all those beautiful pens. After all, he is in the pen business. Having a huge pen collection is one of the perks that comes with business ownership.

I watched a popular fountain pen vlogger admit that he spent a ton of money (over 20 grand) during his first year of production. While he didn't elaborate, I suspect that a fair amount of that money was used to purchase fountain pens and ink based on his content. An alarm bell went off in my head.

While many of us admit jokingly to having a bad case of "fountain pen acquisition syndrome", things can easily get out of control, especially given the price of high-end fountain pens. I admit I have more pens than I really need. To qualify that statement a bit, I acquired them over a period of several years. (That is a lame excuse, I know.)

However, one thing I did as a frugal fountain pen guy is to put severe limits on the amount of money that I would pay for a single fountain pen. My limit was (and is) $200 for a single pen. Most of the pens in my collection cost me $100 or less. A lot of them are way below $50. And many more are cheapies from China and India. This is helped me to keep my "pen habit" under control.

In recent years, I have been much more careful with my expenditures given the size of my collection. I rarely buy any new fountain pens anymore, and when I want to change things up a bit, I just switch nibs.

I have found that my best fountain pen investments have been in pens that have easily replaceable nibs. You can get a lot of mileage from a midrange pen from Edison, Franklin-Christoph, or even a less expensive one like a Ranga, by just buying some extra Jowo nib units.

For the most part, I have steered away from fountain pens that sport gold nibs. I do have a small collection of Japanese Pilots and Platinums with fine and extra-fine gold nibs. The writing experience of those pens certainly justifies the higher price. At some point, I may add a low-end Sailor to the mix, but I don't see any pricey Nakayas or Pelikans in my future.

I certainly don't begrudge those with high-end fountain pen collections. If you enjoy them and afford them, that is great. But for the rest of us, a bit of reality and moderation is in order. 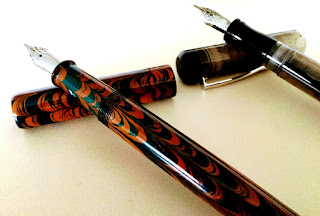 I watched with great interest the explosion of the fountain pen market around 2010.  It was an exciting time since flex nibs began their resurgence and it seemed like every pen lover had to have one.  Noodler’s pens and inks were riding that trend. A company called the Goulet Pen Company started in a bedroom around that time.  And an interesting vlogger from the Netherlands by the name of SBRE Brown started doing pen reviews.

I started “The Frugal Fountain Pen” blog in 2014 to focus on pens and accessories at the lower end of the cost scale.  It seemed like more attention was being devoted to expensive fountain pens and cheaper pens were not getting that much attention.  That trend continues.

It also seemed like not many new inexpensive fountain pens were being introduced. Fountain pen production is expensive, especially in the development stages, and most companies can’t afford to take the risk of releasing a product that may not sell.

A few years ago, I turned my focus to fountain pen videos on YouTube with mixed success. YouTube is such a large and popular platform that it is hard to get enough visibility to build an audience. In addition, YouTube is making it much more difficult for smaller channels to produce revenue to help subsidize the costs of their productions.

Within the last few months, I read that one of the most popular YouTube channels covering fountain pens was shutting down. I enjoyed watching “The Pen Habit” since its introduction and will miss Matt Armstrong’s valuable videos and pen reviews.  He has raised the bar for YouTube fountain pen video production.  You can find his final video here:

To help fill the void, I have decided to spend more time writing for this blog rather than concentrating on fountain pen videos.  In addition, I just completed a new book aimed directly at new fountain pen users.  It is called: “Getting Started with Fountain Pens”.  It is a very short book in the introductory price is only $.99. It will be available on Amazon for Kindle, Smashwords, Apple Books, Nook, and Kobo.

If you know anybody that may be interested in my new book, or if you want to support my efforts, you can find the link here: 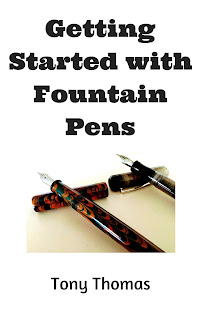 I hope that you are having a happy Fountain Pen Day today and will take some time to write with your fountain pen if you own one.  If not, today is the day that you should order one!

I have been experimenting with speed writing to allow me to take notes faster. Do you use shorthand or speed writing?

Also, here are some cool links I found on shorthand and speed writing:

Click on the logo. Your gift of any size appreciated.

Click on the logo. Send support to: tonythomas-at-tonythomas.net. Any amount (even $1) would be greatly appreciated!

As an Amazon Associate I earn from qualifying purchases.